Here’s a hearty pasta dish to tide you through the winter, where the kiss of the sea comes with a warm umami embrace. Think of it as high-quality Amalfi Coast comfort food.

First a word about the carbs. Like many of the classic pasta shapes, pasta ribbons have different names in different parts of Italy. In Bologna - the homeland of this particular ‘cut’ of pasta – they are called tagliatelle. You can see them hung out to dry in fresh pasta shops and the backrooms of the city’s trattorias, pretty much every one of which will offer tagliatelle al ragù – a meat-rich tomato sauce that is a million miles from the sacrilege of the dish we Anglo-Saxons call ‘spaghetti bolognese’.

Head south to Rome and tagliatelle become fettuccine. Press on further, towards Naples, and you’re more likely to see these long pasta strips called nastri, or ‘ribbons’. The width can change a little: generally, nastri and fettuccine are a couple of millimetres wider than tagliatelle, which according to Bologna’s Chamber of Commerce should be 8mm across (they actually have a golden tagliatella standard, cast in 1972, to settle disputes).

What also changes – not just for pasta ribbons – is the composition of the pasta itself. North of the Apennines, Italians tend to favour egg-rich pasta – made with one egg per 100g of flour, and little or no water. South of Italy’s mountainous backbone – so from Tuscany and Umbria down through Lazio to Campania and beyond – pasta is generally made using only grano duro (Durum wheat) and water.

You’re welcome to use either type of pasta in this recipe, but Le Sirenuse’s executive chef Gennaro Russo recommends Neapolitan style flour-and-water pasta, either homemade or from a good-quality dry pasta supplier.

Finally, some guidance on bottarga. Known as boutargue in French, this refers to the eggs of certain fish – particularly the grey mullet (muggine in Italian) – which are removed from the fish intact within their ovarian sac, salted, pressed, sun-dried, then coated in edible wax. Sold in long, hard pieces that resemble flat brown sausages, bottarga is often grated onto pasta or sliced thin and served on salads for a strong, slightly bitter tang of the sea. Gennaro Russo suggests using tuna bottarga in this recipe, but if you can’t find it, grey mullet will do almost as well. You can buy bottarga pre-grated, in jars, but the solid version will give a fresher, more flavoursome result. 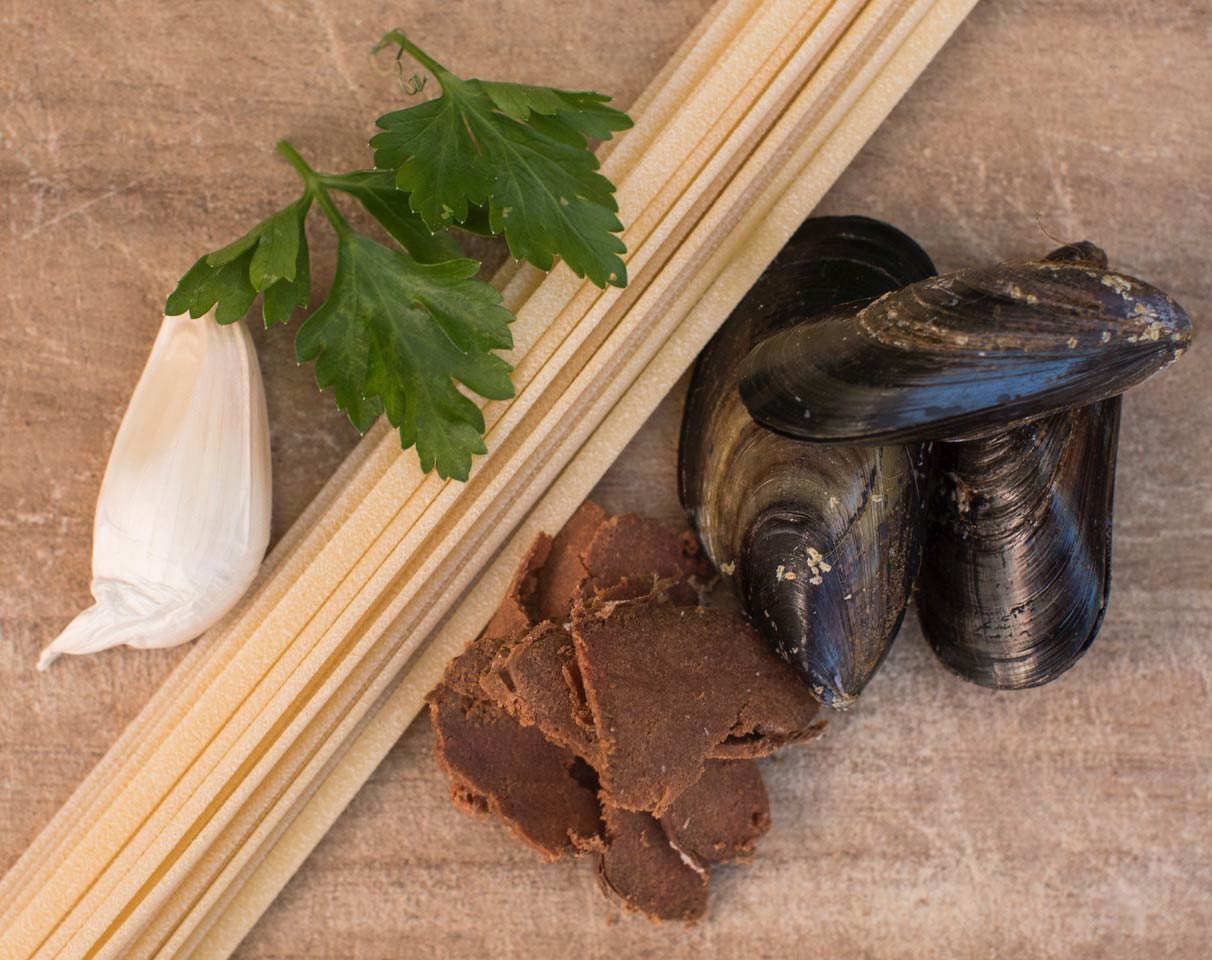 If your fishmonger has not already done so, remove the ‘beard’ that dangles from each mussel by gripping it firmly and sliding it down the crack between the two halves of the shell. Next, rinse the mussels in a large basin and rub each one with coarse sea salt to remove seaweed and marine encrustations. Then place them in a bowl with a little water (100g should suffice) and the parsley.

Cook the pasta in abundant salted water; time this operation to fit in with the mussel preparation below. When the pasta is still al dente, reserve a cupful of the cooking water before straining.

Crush the garlic cloves a little under the blade of knife and toss them in a pan with a little oil until they take colour. Throw in the mussels, with the water, covering immediately and raising the temperature so they open – this should take around three to five minutes. Peek under the pan and when all or most are open, turn off the heat so the juice they run does not evaporate; discard any unopened mussels.

Pour the juice into a bowl, filtering it through a chinois to remove any grit or shell debris. Then remove the mussels from their shells, and add to the bowl.

Heat some more oil in a pan with a couple of crushed, unpeeled garlic cloves, then add the mussels and their cooking water. Toss for a few seconds on a medium heat, then add the pasta, which should still be al dente, and some of the cooking water from the cup you reserved, and continue cooking, stirring with a wooden spoon, until the pasta is cooked (this should take two minutes at most). Turn off the heat, add a dash of olive oil and the chopped parsley, and serve with grated slivers of tuna bottarga.